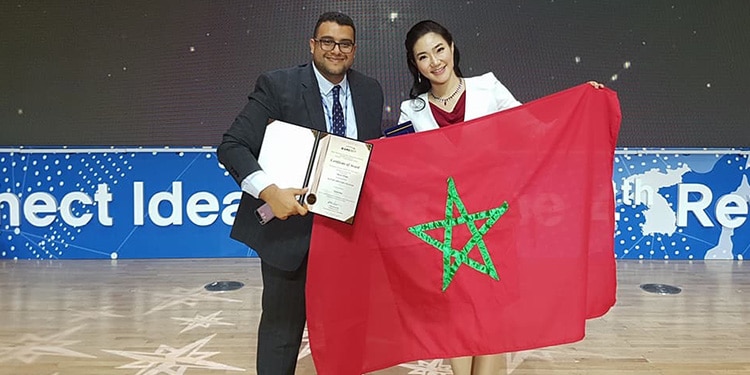 Ultimate achievement at international scale for Morocco this week. BIXPO 2017 (The Bitgaram International Exposition of Electric Power Technology) held from 1-3 Novembre 2017 in Gwangju, South Korea, was a wonderful opportunity for Morocco to be awarded two silver medals through EMSI – Science Engineering School of Morocco.

BIXPO ranks among the most prominent world invention contests, hosting over 60,000 visitors and over 3,000 inventors from across 48 countries specialized in electricity, energy, TICs, ecology and domestic sciences.

Through ‘SMARTiLab’, its R&D and Innovation Laboratory, EMSI was once again proud to steer its country to greater heights of achievement with two silver medals for ‘Senstenna’, its innovation in the Smart-Cities category and ‘EFMA’ in the Health Care field. This significant scientific venue was organized by the famous Korean company KEPCO (Korea Electric Power Corporation) partnering and backed by large enterprises such as Hyundai, LS IS, Samsung SDI, Doosan Heavy Industries & Construction.
This event also enabled companies to meet up with buyers from the electric energy industry, along with other players such as experts from both the industry and the institutional sector, scholars as well as Inventors’ international associations.
The innovation ‘Senstenna’ which was rewarded during this contest is a new technology pertaining to the 5th generation communications system and specifically to the business of connected objects aka IoT (Internet Of Things). It is a SensorLess IoT which uses the RF waves of a given communication module to detect different kinds of magnitudes without using a dedicated sensor. Several applications already use this revolutionary project, i.e.: for detecting obstacles, movement and speed.

EFMA was awarded a silver medal in the following categories: health, safety and security. It is a new Electromagnetic absorber based on a metamaterial which won two Gold Medals and two trophies at iCAN 2017- International Inventions and Innovation Contest- and a gold medal at EUROINVEST- European Exhibition of Creativity and Innovation held in Romania- and at ‘Archimedes’ – International Salon of inventions and innovation technologies of Moscow- as well as a fifth gold medal at the International Conference on Education, Research and Innovation in Kuala Lumpur. Its purpose is to protect the layers of our skin against harmful effects of electromagnetic radiations such as ionization and particularly thermal effect. This new absorber is designed to have applications in the health sector, mainly to protect patients and staff against radiations in their radiology and radiotherapy activities. Moreover, this absorber system offers a wide array of possible solutions to protect human beings against military electromagnetic attacks.

According to Dr Kamal DAISSAOUI, President of EMSI Group: ‘Our school is highly interested in research, development and innovation; therefore, we strive to represent and promote the ambitions and ideals of our nation in terms of invention and innovation, and seek to honorably represent our country through such prestigious international events’.